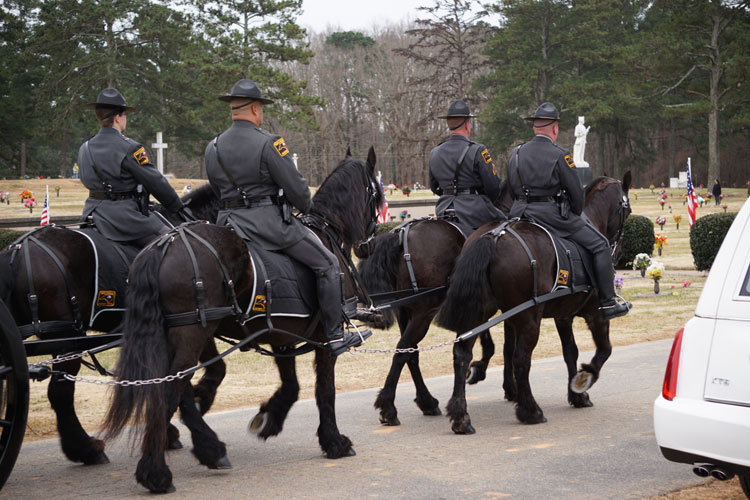 The Caisson Unit is an “at-need” service provided by the NC Trooper’s Association (NCTA) and the NC State Highway Patrol (NCSHP). The NCTA maintains the horses and equipment. The NCSHP provides sworn and trained personnel to participate in carrying out the responsibilities of performing the funeral missions.

What is a Caisson?

The Caisson is a horse-drawn military wagon that is used to transport a funeral casket. The Caisson wagon is well known for its use at Arlington National Cemetery where it has carried fallen soldiers and former United States Presidents to their final resting burial. The North Carolina State Highway Patrol Caisson members have been trained by the United States Army “Old Guard” at Arlington National Cemetery and perform funeral missions as requested through our organization.

Our Caisson wagon is Amish built. The Trooper’s Association purchased the wagon in September 2006. The wagon arrived with a flat black finish. It was then taken to the State Highway Patrol body shop in Asheville, NC where it was disassembled, sanded and refinished to museum quality.

The Caisson wagon was built as closely as possible to Civil War specifications. Only a few modifications, such as ball bearings in the wheels and rollers on the back, were made. The rollers were added so the casket could be rolled off the back rather than lifted over the rear wheels.

The blueprints used to build the Caisson wagon were acquired from the Smithsonian Institute and are several pages in length, which provide every detail about wheel size, the number and shape of spokes, the hub size, the platform dimensions and the types of wood used for each part of the wagon. (The blueprints were taken from the Caisson Ammo Box and not returned).

Our Caisson wagon, all leather and other equipment are made as close as possible to that used by “The Old Guard” at Arlington Cemetery. This was done for two reasons. First, to strive to operate as closely as possible to established military protocol. Second, should our Caisson Unit ever cease to operate, all equipment will be turned over to the U.S. Army 3rd Infantry for use at Arlington Cemetery.

The Caisson wagon is pulled by a team of four horses, preferably black in color. A team of white horses is also acceptable. At this time, the North Carolina State Highway Patrol and the North Carolina Trooper’s Association agree to only use black horses for this mission.

The Caisson wagon measures 7 feet wide and 24 feet long. When loaded with a casket, the wagon weighs approximately 1500 pounds.

The Caisson Unit made its debut at the State Highway Patrol Training Academy for the Law Enforcement Officers Memorial Service on May 14, 2007. Since then, the unit has hosted NC Trooper’s Association meetings, hosted Equine meetings for our partners, presented many educational programs, has had several visits from church youth groups, Girl Scout troops, high school 4H clubs, and has continued to build a network of support across North Carolina and its bordering states – Georgia, South Carolina, Tennessee and Virginia.

In June of 2008, the Caisson Unit was called upon for the first time to perform a funeral service for Trooper David Shawn Blanton. A few weeks later, we were again called by the North Carolina Forest Service to perform the service for Forest Ranger Curtis Lloyd Jessen. Just eight days later, in September of 2008, we were called on for the funeral service of Trooper A.J. Stocks. Again in September, we performed the service for Caldwell County Deputy Adam Klutz. All services were for “in the line of duty” deaths.

Between late June and September 2008, the Caisson unit was activated four times with less than 24 hours notice and each time was able to respond.

Each time, we were able to adapt and complete our mission. These incidences are the reasons we take our training and preparation so seriously.

Thanks to Our Sponsors